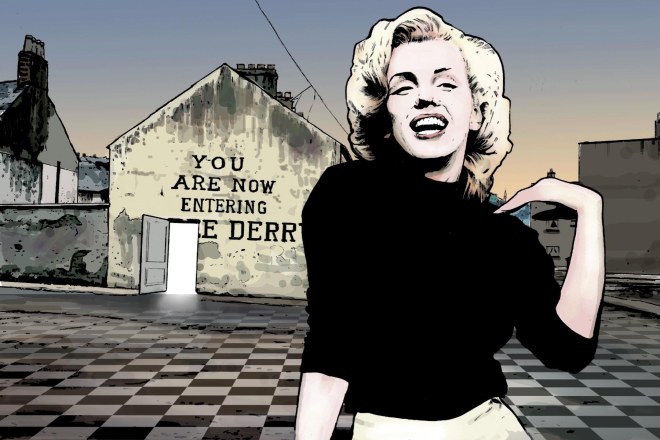 I Dreamt I Danced With Marilyn

I dreamt I danced with Marilyn.

We skimmed across the stars

we tumbled as we spun

I, alive like never before, she no longer dead.

We sailed across a chequered floor

and there, before an open door,

that led to somewhere else

we stopped and caught our breath.

And there, I bowed to her

and then, she smiled

and took her leave

to continue with her death.

Whilst I rejoined the living

my head no longer full

of darkness and of dying.

And then again we found ourselves

By the shore of an emerald ocean

She and I beside its nearness

And she offered me her gratitude

For granting her those moments.

And, again, we parted

to return to where I started

Back to breath and light

to the miracle of existence

Hi folks, new wee poem paying court to (in my humble opinion) the best blues guitarist of them all, Rory Gallagher. Having been reared in a militarized zone, in the middle of a war and having experienced the full-on demoralizing effect of the Northern Irish troubles through the 1970s, 80s and 90s this guy was one of the few bright lights in a very dark world. The fact he was Irish, the fact he was gifted and famous, the fact he was ours, meant a lot.

The poem is a tribute, not just to Rory himself, but also to his guitar, his battered, Fender Stratocaster. For those who don’t know the background, Rory’s guitar was as famous as he was, like the man, it was an individual one-off. It was a 1961 model, manufactured by the Fender company in the US, that had a sunburst finish when it left the factory in 1961. But, because Rory had a certain blood type, the sweat from his fingers was caustic and over time, most of the paint worn off, lending the guitar a unique worn, pitted, eroded look, once seen, never forgotten.

As well as his guitar, Rory also was usually bedecked in checkered shirts and denim, not because of any conscious “rock star” imaging but that was what he liked to wear the same as most of those who came to hear him. And, watching any of his live performances, the man always gave such a passionate performance when playing. For those not familiar with electric guitar jargon, Rory got his distinctive tone and sound from just one small effects pedal a thing called a, treble booster, that did just that, boosted the treble on his guitar sound. He was also known to use a Tube Screamer, yet another legendary effects pedal and his amplifier of choice was a Fender Twin Reverb. All those added up to a unique signature, as unique as the man himself.

Finally, I think, one of the saddest things I ever saw , was the image of Rory’s guitar entombed in a glass case, on show as some sort of curio, just the idea of the music created on that instrument having died along with its creator is difficult, but it is nice to see that a few other well known guitarists/fans like Joe Bonamassa, have freed that guitar from its slumber. Hope you enjoy the poem.

A Manchester-based podcast review of The graphic novel I did with Dave West and Accent UK. Some extracts and artwork from the book included above. The review is about 13-14 minutes into the podcast. The comic can be got at Accent Uk’s website Follow the link below for the podcast:

A Manchester-based podcast review of The graphic novel I did with Dave West and Accent UK. Some extracts and artwork from the book included below. The review is about 13-14 minutes into the podcast. Follow the link below:

These alternate mementoes/artist’s view of the troubles are currently on sale as A4 prints at Checkpoint Charlie in Waterloo Street in Derry. They represent a cultural, more abstract view of Derry’s recent troubled past.  Since so many tourists are drawn here by that very thing, the aim is to give them a more relevant momento of their stay, something unique and relevant to their visit. These images also have poems attached to them. I’m hoping to publish these as part of my second collection of poems sometime soon. I’ve included the poems below as well as the image.

Buzz Aldrin at Free Derry Corner As Armstrong and Aldrin bounced on the moon we battled in the Bogside, a giant leap backwards as the gravitational pull of reality barren as the moon above, dragged us back to Earth   I sat, a boy, agog at the black and white flickering miracle on TV sat open-mouthed, clutching my model of Apollo watching grown men cry I bounced round the room with Neil and Buzz witness to history in the heavens while all around me, down on the ground deployments, walls and peace lines rose   And now they come like Aldrin and Armstrong the ultimate tourists drawn to those walls posing for photos, smiling at the moon

Hi folks, looking for an alternative, creative, artistic Christmas Present for someone close? These posters are signed and are part of a limited edition of 100. They are available at both A4 size and A3 sized posters.
Unframed prices A4: £25 A3: £50
Framed: A4: £50, A3 £100

The prints will be on a heavy satin finish paper.

Just putting the finishing touches to a series of digital images, some old some new. I’m planning an exhibition of these later this year and plan to put out an alternative set of postcards/artworks that on the theme of images generated by memories of the troubles.

The images will be digital pieces, rendered in my comic book style and will feature Free Derry Corner, media icons, cultural juxtapositions designed to make the viewer look and think.

Look out for these hopefully I’ll get them into local tourist spots and The Museum of Free Derry and anywhere else I that will have them. Since so many tourists are drawn here by our troubled past the aim is to give them a more relevant momento of their stay, something unique and relevant to their visit.